An index to the Prague series appears on the first post.

For my final full day in Prague, I opted for a hike to the top of Vyšehrad, a hill castle guarding the south river approach to Prague.  This area is considerably less visited by tourists than is true of the Old Town or the castle (Pražský hrad).  I was unsure what to expect, but I felt sure that my legs would appreciate one last stretch before the train and flight back home to South Africa! 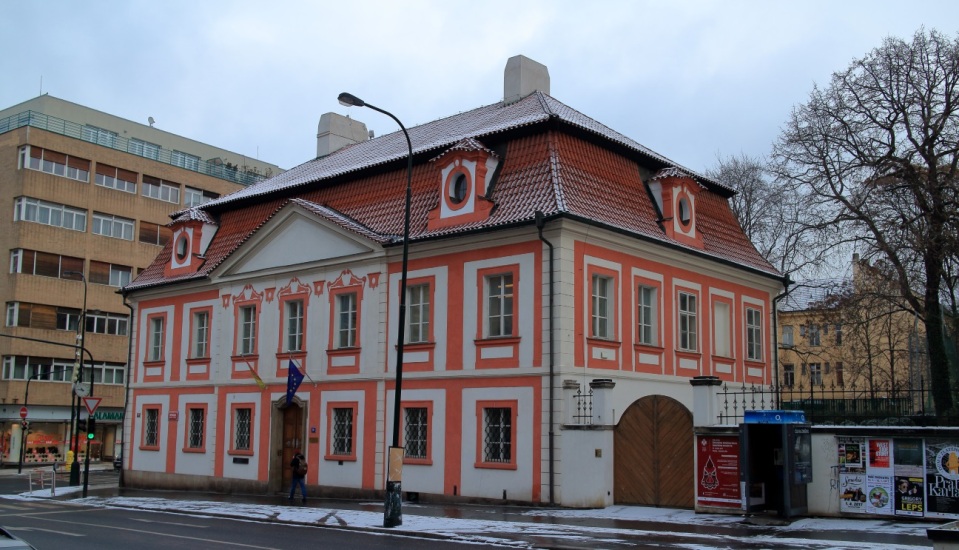 I loved these bright colors.

My stroll took me through some of the key historical buildings of the New Town.  I have already shared a photo of the New Town Hall, but I am sure I have not mentioned the delightful orange and white building next door to the Saint Stephen (Svatý Štěpán) church (built when New Town was new).  Just to the west, I encountered the large public park in front of New Town Hall.  I headed south to encounter the substantial Church of St. Ignatius (Kostel svatého Ignáce).  As I stepped into the vestibule, I encountered a homeless person, asking for change.  Since I had no Czech currency left other than some minor change, he was disappointed, and he responded with a phrase I recognized from reading spy novels (loosely translated “oh my god!”).  In the image below, I have shown the interior of St. Ignatius at the left. 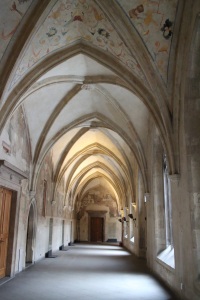 Who doesn’t need stillness from time to time?

It is plain that the church on the right places a much lower value on decoration!  As you might have anticipated from the photo caption, the next site I visited was the Emmaus Monastery.  I had not seen any tourist literature directing me to the place, but a helpful sign directed me to the entrance.  The friendly docent refused to let me pay the full adult admission and insisted on student admission instead (which was handy, since I only had a little pocket change).

I walked through the door into nearly total silence.  The square cloister was very peaceful, receiving only indirect light from the enclosed courtyard.  The pamphlet I had received at the entrance gave a helpful map explaining the art in each alcove.  The images were very old, dating from the creation of the abbey by Charles the IV in 1347, and the monastery had suffered bomb damage during World War II.  Restoration on the art has not yet returned its former glory.

I was strongly moved by the peace of the cloister.  After a quick look at the nave I included in the comparison above, I paused at the corner of the cloister for just a moment.  I sang a song for my friends back in Nashville.  The reverberations were very comforting.  I continued on to a small chapel that I had missed on my initial walk.  I was astonished to see the image of a spear head that I had last seen in Warsaw!  This chapel had once featured sacred relics believed to be from the Crucifixion, specifically nails from the cross and the spear that had pierced Jesus.  The art in this small chapel has been restored to a much greater extent than in the cloister outside.

A refurbished chapel in the Emmaus Monastery 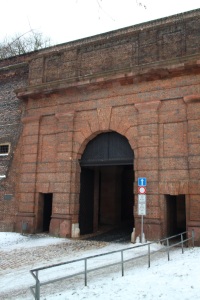 This massive gateway dates from 1841.

Having spent some time with the transcendent, I was ready for a bit of a slog.  I trudged south along the evocatively named “Na Slupi” in the cold wind.  It seemed to be picking up speed, and a few snow flurries came my way.  I came to a rail underpass that was my route to the Vyšehrad access.  The roads led steeply uphill.  Soon I encountered the massive brick gate (cihelná brána) of the rooftop fortress.  I nearly fell on my backside trying to get a photo; once I stepped away from the roadbed, I was slipping and sliding on ice.

I should explain that Vyšehrad was prominent in the ancient history of Prague and regained standing in medieval times.  The castle atop Vyšehrad was the ducal seat of the Přemyslid dynasty during the 10th century, before Prague Castle was constructed on the opposite side of the Vltava River.  The area’s rebirth came about after the New Town extended to the south in the 1350s.  After the ancient fortress fell into ruin, a new Baroque fortress atop Vyšehrad was established after the Thirty Years’ War, in 1654.

The church looks pretty great for being nearly a millennium old!

My first stop inside the walls was a visit to the Rotunda of St. Martin.  The rotunda represents an ancient type of church architecture that pre-dates Gothic cathedrals by half a millennium.  St. Martin was constructed during the reign of Vratislaus II, who died in 1092.  The building has been decommissioned and renovated a few times over.  Its walls still contain a Prussian cannon ball from 1757!

I wandered south to the most external gate of the walls, Tabor Gate, originally built in 1655.  The information center was closed when I walked past, and most signs that I observed were in Czech, so I felt somewhat unsure of what I was seeing.  As I followed the walk back north on a bluff to the east side of the Vltava River, though, I was treated to some really lovely views of today’s Prague.  I saw a private boat harbor to the east side of the river, and ice had covered the entirety of its surface.  Soon, though, I came across some ruins. 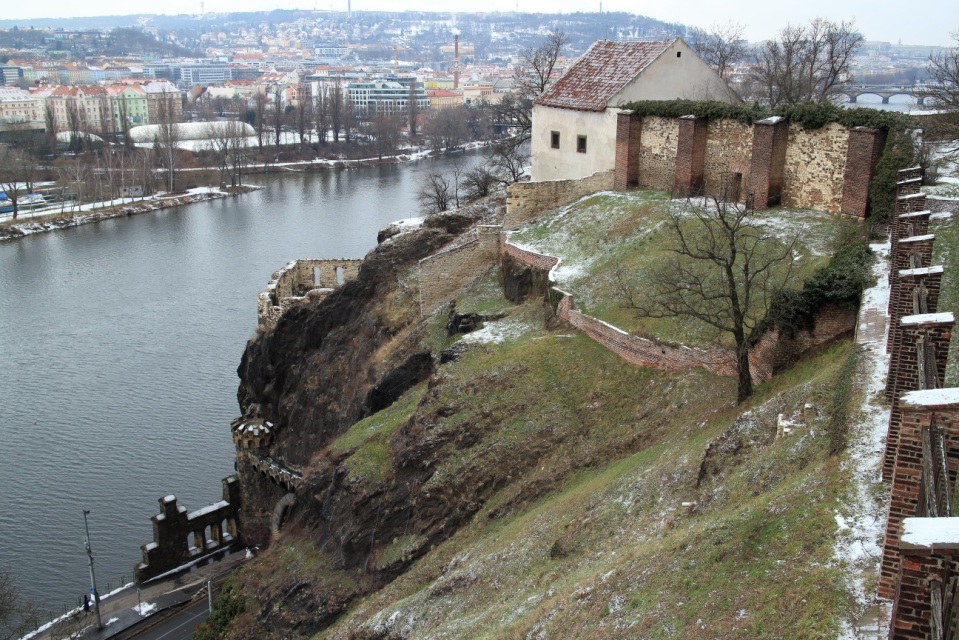 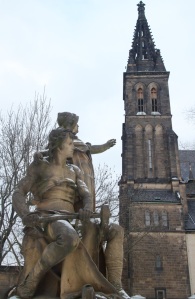 The St. Peter and Paul Basilica

Legends surround this place, as well.  After the warrior Čech settled in this area, his son Krok produced three daughters.  The youngest daughter, Libuše, was famed for her wisdom and prophecies.  She was selected as leader for the land, as a result (and gave her name to the tower shown above).  When people complained that a woman should not lead by herself, she prophesied that her white horse would lead her servants to Prince Přemyslid, who would become her husband.  Soon thereafter, the happy couple launched the first dynasty that ruled Bohemia from Prague.

Even before the creation of the New Town, a church had stood at the crest of Vyšehrad.  The 11th century church was remodeled in the second half of the 14th century and again at the end of the 19th.  St. Peter and Paul has been an important part of Prague history as the political leadership shifted between Vyšehrad and Prague Castle and as religious leadership has shifted among the three principal churches of the city (the others being St. Vitus and Our Lady before Týn).

Final resting place of one of my favorite composers

The graveyard adjoining St. Peter and Paul came into vogue during the 19th century, and a quick walk through the grounds will show any number of beautiful memorials and tombs.  The classical composers Antonín Dvořák and Bedřich Smetana are both interred there, and I recognized Jan Neruda, a writer and poet, as well.  It seemed strange that this place at the edge of the city would have regained this prominence at such a late date.

King Wenceslaus looks out on a magnificent view of his city.

I was glad, though, that I could finish my visit to Prague at Vyšehrad.  My final moments of tourism saw me slipping and sliding across the icy hill top.  At last I reached a lovely equestrian statue of St. Wenceslaus.  It dates from 1680, when it was crafted by Bendl for the Prague Horse Market.  This area was subsequently renamed “Wenceslaus Square;” the statue currently standing outside the National Museum was a later replacement.  I think that the dukes, kings, and emperors who have ruled Prague would be delighted if they could see it today.  I know I was!

2 thoughts on “Prague: off the beaten track in Vyšehrad”